How to Teach Vowel Teams

Vowel teams are probably the most common source of reading and spelling errors as one vowel sound may be represented by as many as 6 different vowel teams (e.g. long ‘o’ represented by ‘oa’, ‘ow’, ‘oe’, ‘o_e,’ ‘ough’ and ‘ew’ as in sew). There are 25 standard vowel teams and, consequently, it is vital that they are taught well.

In this blog post, I am going to examine how to teach vowel teams. They are the focus of Part 2 of Phonics Hero and additional vowel teams (‘oi’/’oy’, ‘ow’/’ou’, ‘oo’, ‘aw’/’au’) are introduced in Part 3 (get access to lots of free resources in a Teacher Account here). To teach vowel teams well, you firstly need to understand how they work.

We have 18 vowel sounds in English but only 5 vowel letters with which to represent them so it is necessary to use combinations of the vowel letters. The correct terminology for 2 vowels working together to represent one sound is ‘vowel digraph’. The letters ‘y’, ‘w’, ‘gh’ and ‘r’ are also used in representations of vowel sounds (as in ‘ay’, ‘ow’, ‘igh’ and ‘er’), so I quite like using the term ‘vowel teams’ with younger students. I use the terms “weak” and “strong” vowels rather than “short” and “long” vowels as it is hard for young children to understand what is short or long about them (long vowels require two mouth movements rather than one – a bit complicated for a six-year-old!). I’ll be using those terms to refer to the sounds represented by vowel teams.

How to Teach Vowel Teams – Things You Need to Know

Why are consonant letters used in vowel teams?

What is a diphthong?

A diphthong is not a new type of uncomfortable underwear, but rather one (complex) vowel sound formed by the combination of two vowel sounds in a syllable. It is sometimes referred to as a “glide” because the mouth glides from the position for one vowel to the position for another. There are 8 English diphthongs, including the vowel team pairs ‘oi’/’oy’ and ‘ou’/’ow’. Most vowel sounds are made with the mouth in one position, making one pure sound e.g. /a/.

What are split digraphs?

The vowel digraph teams ‘ee’, ‘ie’, ‘oe’ and ‘ue’ are used in common words while ‘ae’ is used in a few technical words e.g. ‘aerate’ and ‘aesthetic’. Split digraphs are separated members of a vowel team – they are separated by a consonant. For example, the ‘ie’ in ‘bike’ is split to become ‘i_e’. Split digraphs combine the letter ‘e’ with the five vowels to represent strong vowel sounds.

When talking about split digraphs, be careful of the language you use. Do not use the terms “fairy e”, “magic e”, “bossy e” or “silent e”, as they do not help a student to understand the logic of our code. The ‘e’ is no more “silent” when it is split from its team member (as it is split in ‘eve’, ‘line’, ‘bone’, ‘rude’ or ‘cave’) than when it was right next to the other vowel. We are still looking at an e-controlled vowel spelling. Likewise, there is no logic in “silent letters” – all letters are silent! Nor is the letter ‘e’ more bossy than any of the other vowels that come second in a pair.

The complication for reading is that some vowel digraphs represent more than one sound. For example: 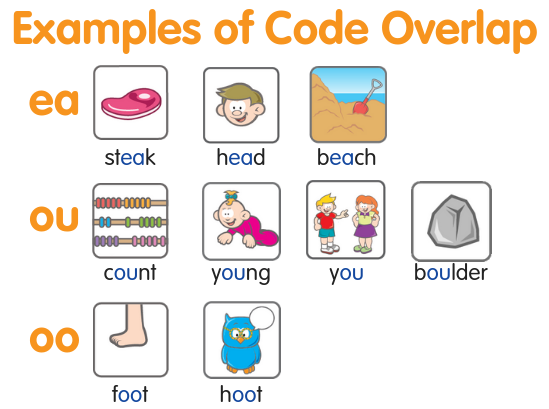 This is a focus of Part 3 of Phonics Hero. When you come across alternative pronunciations for the vowel digraphs, take the time to discuss the other uses, to clarify any confusion.

Why do we use gh in vowel spellings?

The ‘gh’ combination, like in the word ‘high’, was inherited from the Germanic languages that had an impact on English. We used to pronounce the ‘gh’ in Old English, but as something like a ‘k’ sound e.g. the Gaelic word, lough (loch). The German for ‘light’ is ‘licht’ and ‘night’ is ‘nacht’. When Middle English changed to Modern English, the sound was dropped or, in some words, changed to the softer ‘f’, as in ‘rough’. The ‘gh’ has been left in the spelling to show the word’s origin.


How To Teach Vowel Teams – Some Tips:


Be sure to make your vowel team teaching systematic, explicit, sequential, multisensory and cumulative.

3 responses to “How to Teach Vowel Teams”